I am a supporter of the idea to invest in companies that are present in your local neighborhood. This is idea is not very new. For instance the Beardstown Ladies was a group of sixteen ladies of age who started investing with a mere amount of 1,600 USD. They gained a lot of attention in the 1990s with their investment approach based on a very down-to-earth philosophy. According to Buffy Tillitt-Pratt, one of the ladies: “We like to invest in things that we know, and things that we understand, but we also have to look at the numbers too”. They bought for instance stocks of firms that made products they owned themselves (rubber boots, cars) and in shops they new.

While the returns of the Beardstown Ladies were rather overstated, in the end their return wasn’t that bad at all and in 2016 their portfolio was reported to be 450,000 USD. Critics claimed that an investment in an index fund would have yielded a higher value. Perhaps this is true, but by investing in what you know, your remain more motivated to remain loyal to your investment strategy. Most likely, the ladies would never have started investing if they would have to be invested in an index fund.

This list presents firms with more than 800 employees working in one of the three Northern provinces. Many firms represent consumer brands (MacDonald, Philips, Vodafone), were others are very visible as many consumers profit from their services such as Ahold Delhaize (Albert Heijn), NL Post, ING, KPN, Vodafone (Ziggo). A few are less visible: Aegon runs a large office in Leeuwarden and one in Groningen (TKP Pensioen), Teijin is active in Chemicals and Melrose (former activities of Fokker). Based on the list, any investor could create his or her own portfolio of regionally active stocks.

In the past two decade we have experienced a rather dramatic change in the way that households invest. Fuelled by a lot of bad press on active management and the skills of banks and asset managers, many have decided to disengage from stocks market investing and switch to a standard savings account, mutual funds and index funds. Obviously, the global financial crisis of 2007/2008 had a lot to do with this too. In 2020 and 2021, the COVID19 crisis kept a lot people at home, reengaging them with stock markets. Some of them started chasing stocks such as GameStop motivated by boredom or protest against the evil of hedge funds.

Unfortunately, this leads to a disconnect between the typical citizen and the financial markets. Few people understand the true contribution of fianncial markts to society, as a means of allocating investments to valuable projects and as a means of facilitating cooperation between people with small savings how do not know each other. Many people lost their trust in financial markets, mostly as a result of the many scandals in the previous two decades.

In this blog, I like to draw the attention to one often ignored reason: the strong focus on individual returns in combination with the anonymity of investments. It is of course difficult to deny that the main motive for investing is financial returns. However, money itself doesn’t create wellbeing, but the way it is spend may  have a big impact. As an example, most of us would appreciate a carefully selected personal birthday gift over a check. This also applies to investing. Probably the only benefits of investing in the MSCI Global Large Cap Equity Index are its financial returns and perhaps the idea that you have not been ripped off by a greedy asset manager. There will be little affection in your decision to buy this index.

For this reason, it is understandable that investors increasingly choose for socially responsible investments. Yet, many socially responsible investment funds are spread across the globe, and give the investor little more than the idea of doing well without knowing what it actually means. Globalization provided the world with economic growth, but made it difficult for the individual human being to understand and belief in the system that generates wealth. It has become abstract and far away, resulting in rising populism and focusing on the home country. Donald Trump got elected on his theme ‘Make America great again’, yellow vests crowd the streets of France, the people of Great Britain opted for Brexit, and so on.

It is important that humans can effectively engage and connect with the systems that support their lives, and one of these systems is the financial system. For this reason I have a very modest proposal that may be helpful. I propose that people can choose an investment portfolio of firms that is active in the local neighbourhood, province, or city. In particular, I propose that such a portfolio would allocate its investments according to the number of people working in the region for the particular firm. Essentially, you invest in firms that employ your neighbour.

There are some practicalities here, but I did some basic checks for the provinces of Groningen, Friesland, and Drenthe in the northern part of the Netherlands, which yielded interesting results. First of all, there are more than 100 companies active in this region that are listed on the stock market. That is sufficient for creating a well diversified portfolio. There are many firms listed on a foreign exchange, and so perhaps the most surprising results is that this regionally oriented portfolio is actually an internationally diversified portfolio. In addition to this, the branches of these firms provide over 20,000 jobs, which provided an additional argument for citizins of the northern part of the Netherlands to invest in this portfolio: Invest in the job of your neighbour!

Of course, my proposal is rather broad and should be investigated further to make it operational. Yes, there are a lot subjective choices. What kind of firms do we want in Groningen? Polluting firms with a lot of employment? Should we focus on the energy transition? But having these discussion on the level of a local investment fund is a lot better than outsourcing them to fund managers in faraway financial centres! 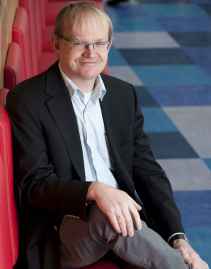